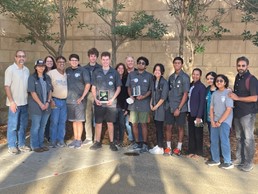 From March 10th to 12th, the Creekside Robotics Team 8775 competed in its first ever robotics competition.  The competition was sponsored by FIRST Robotics and was held at UCF. The competition consisted of two main challenges. The first of which was to collect oversized tennis balls on the floor, and to shoot them into a goal eight feet above the ground. The second challenge was even more problematic; get the 125-pound robot to climb a series of bars up to eventual height of more than 7 feet. To overcome these intimidating challenges, the team of students, teachers and volunteers from the Engineering and Cybersecurity Academy worked tirelessly to get the robot up and running for the competition. This hard work was shown in their every match. The Creekside team performed in a tour de force, fooling other teams into thinking that they were a seasoned veteran team. And on the final day, when the dust had settled, the team received a final ranking of 25th out of the 56 teams – placing higher than every rookie team on the field. What may be even more impressive is that they were able to rank higher than more than half of the veteran teams on field, some of which had been competing for more than 20 years.

This tremendous success was a testament to the two months of demanding work that the Creekside team put into the robot before the competition. Students, teachers, and mentors alike spent long hours after school trying to get to robot up and running for the competition. These hours of CAD, manual labor, and ingenuity eventually paid off with a working robot and a trophy that is sure to stay in the Engineering Academy classroom for a long time.